The Oil Boom in Texas 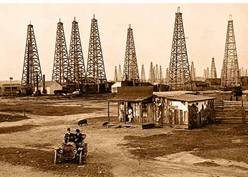 The modern oil industry was born on a hill in southeastern Texas. This hill was formed by a giant underground dome of salt as it moved slowly towards the surface. As it crept, it pushed the earth that was in its path higher and higher. This dome was known by several names, but the one that stuck was "Spindletop". Through the latter half of the 19th century, Pennsylvania had been the most oil-productive state in the country.

Everything would change on January 10th, 1901. Native American Indians in the area had been aware of oil seeps for centuries, and used the tar they found at the surface to treat a variety of ailments. Some would even drink the stuff in hopes that it could cure digestive problems. In 1543, Spanish explorers discovered that black, sticky tar found washed up on the beaches along the Texas coast could be used to waterproof their boots.

In the late 1800's, Texas had produced minor amounts of oil, starting with a well in 1866 drilled by Lyne T. Barret near the east Texas town of Nacogdoches. This field, known as "Oil Springs", was finally exploited again in 1888, when a crew of drillers from Pennsylvania had a well come in at 250 - 300 barrels per day. This find attracted other oil companies, and it would only be a matter of time before the huge, untapped potential of the underground reservoirs was discovered.

Corsicana was really the first big producing field in eastern Texas. This field, like so many others in the early days of oil, was discovered when local businessmen drilled deep wells looking for water, not oil. Amazingly, the first drillers in this area perceived the oil zones they reached as annoying nuisances, and often drilled past these zones to get to the water they were seeking. H.G.Damon and Ralph Beaton had a bit more foresight, and formed the Corsicana Oil Development Company. They brought in famed Pennsylvania oilman John Galey, and the team drilled marginally successful oil wells in Corsicana in 1896. These wells, however, all flowed at 25 barrels per day or less, and Galey and his partner, James Guffey, sold their interest in the company and headed back east, convinced that there was little future in Texas oil. Locals, however, proved them wrong, and by the end of the year 1900, more than 2 million barrels of oil had been produced in the Corsicana field alone. This was not large by Pennsylvania standards, but it certainly pointed towards the possibilities of something bigger.

Into this world would come another interesting character. Patillo Higgins, a one-armed mechanic and self-taught geologist, was one of the few at the time who believed that, in the future, modern industry would switch from coal to oil. But where to get all that oil? He believed it lay beneath his feet at Spindletop. He had a feeling that drilling a well on top of this salt dome (and others like it) would produce oil, and lots of it. In an attempt to turn his dream into a reality, Higgins organized the Gladys City Oil, Gas, and Manufacturing Company in 1892. Years of frustration followed, with most members of the petroleum and geologic communities proclaiming Higgins's ideas to be silly nonsense. Nearing the end of his rope, Higgins ran an advertisement in a local newspaper, and one man, Captain Anthony F. Lucas, replied.

Lucas, unlike his predecessor in Pennsylvania, "Colonel" Edwin Drake, was a real Captain, having served in the Austrian Navy. Lucas had training as an engineer and experience as a salt miner in Louisiana. But his first wells drilled for Higgins were failures, and the money ran out. The Texas press, as well as the local geologists, had been very skeptical of Higgins for years, and no one in the area believed that a salt dome structure could produce oil. So, Lucas turned to Guffey and Galey, who had left the area 3 years earlier, unconvinced of the potential of Texas oil. Something made them change their minds, and in 1900, John Galey returned to Beaumont, Texas to survey area. He picked the spot, and the drilling began on October 27, 1900.

Drilling was difficult at first. Lucas and his men ran into the same problems that other drillers had faced along the Texas coastal plain. There is little in the way of rock at the surface in that part of the world. Instead, oil wildcatters had to drill through several hundred feet of sand. This made the hole prone to cave in on them. After numerous lives were lost, one of Lucas's drillers, Curt Hamill, came up with a solution that was revolutionary at the time.

Instead of pumping water down the hole to flush out the cuttings produced by the action of the drill, he used mud. This proved to help not only in retrieving the cuttings, but just as importantly, it was found that the mud stuck to the sides of the hole and kept it from caving in. It was found there were even more benefits, and mud has been used in almost every drill hole around the world ever since.

Exhausted after 2 months of strenuous drilling, the crew shut down for a week over the Christmas holiday, 1900, having reached a depth of 880 feet. When they arrived back on site on New Year's Day, 1901, they were energized, and within a week drilled down to a depth of 1,020 feet. After pulling the drill out to change some equipment, they started to lower it back in. The day was January 10, 1901. After lowering it back into the open hole to a depth of about 700 feet, a full 17 hours since the last "drilling" had actually occurred; mud started bubbling back up the hole. Seconds later, the drill pipe shot out of the ground with great force, and then...nothing happened.

After a short time, the frustrated and confused drillers set about to clean up the mess and see if anything could be salvaged. All of a sudden, a noise like a cannon shot came from the hole, and mud came shooting out of the ground like a rocket. Within a few seconds, natural gas, then oil followed. The oil "gusher" - greenish-black in color, doubled the size of the drilling derrick, rising to a height of more than 150 feet (about 50 meters). This was more oil than had ever been seen anywhere in the entire world. Captain Lucas had been hopeful that this well might produce 5 barrels per day. In fact, this well, "Lucas 1", flowed at an initial rate of nearly 100,000 barrels per day, more than all of the other producing wells in the United States COMBINED!

There was much money to be made at Spindletop, but there was even more money to lose. It is estimated that $50 million dollars was made from Spindletop, compared with investments equaling $80 million. As had happened in other booms, there were many frauds and cheats, and Spindletop was renamed "Swindletop" by some of the less fortunate and more cynical locals. The population of Beaumont swelled from 10,000 to 50,000 in a matter of months. Before the end of the year, Lucas' swell was joined by over 200 other wells, all fighting for space on top of Spindletop. These wells were owned by more than 100 different oil companies. The gusher at Spindletop was responsible for creating several companies that were to become giants in the oil industry, including Gulf Oil, Amoco and Humble Oil Company, which would later become an arm of Exxon.

Now, people realized the true potential of oil - the vast resources that were, in fact, there, and the vast potential that remained. Before Spindletop, oil was used mainly for lamps and lubrication - after Spindletop, petroleum would be used as a major fuel for such new inventions as the airplane and automobile. Ships and trains that had previously run on the power of coal now began to switch to oil, becoming convinced that there would be no shortage of the fuel anytime soon. As an example, the Santa Fe Railroad went from only one oil-driven locomotive in 1901 to two hundred and twenty-seven in 1905.

It is difficult to overstate the importance of Spindletop. From this point on, nothing in the oil industry would ever be the same again, for this "gusher" ushered in the modern age of petroleum.

There are significant risks associated with investing in oil and gas ventures. The above information is for general purposes only and is not a solicitation to buy
or an offer to sell any securities. General information on this site is not intended to be used as individual investment or tax advice. Consult your personal tax
advisor concerning the current tax laws and their applicability and effect on your personal tax situation.