For over 40 years the success of ENO PETROLEUM CORPORATION has been attributed to its rigid selection of its drilling prospects.The resultant targets of the selection process of Eno have always been the low risk, shallow vertical drilling with the moderate Estimated Ultimate Recovery reservoirs that continue to produce 10 to 15 years or more with extremely attractive economics, commonly known as "the bread and butter" of the industry.

It is the selection process used by Eno for over 40 years that eliminated so many prospects at the initial stage that has made possible the success rate of over 82% experienced by Eno.

While Eno has a success rate of over 82% on prospects it launched or participated in, it has also disqualified over 75% of prospects from the outset.The evaluation process used by Eno eliminates wasted time and resources on prospects that while looking prospective, did not pass the strict selection criteria. Of the prospects that were chosen to drill, not all were commercially successful.On the other hand, every declined prospect was also a failed well. The chart below illustrates the effectiveness of the EPC selection process. 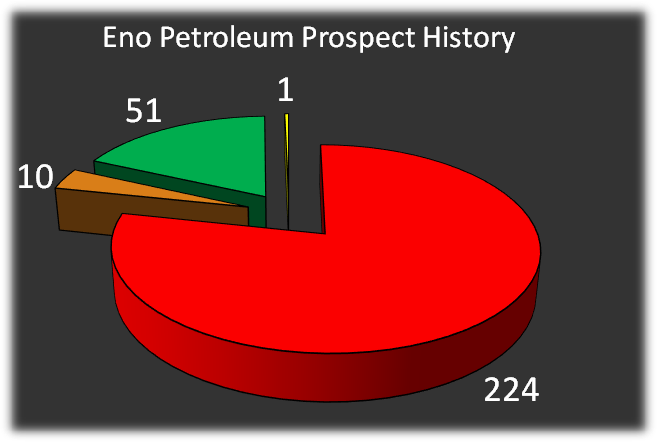 Of the 62 prospects that did meet the initial review criteria and went on to become EPC prospects, 82.3% were completed as successful commercial wells.

Exploration companies generally learn as much from failed drilling attempts as from successful commercial producers.It is a standard industry practice to perform a “postmortem” study on failed prospects.Eno did not perform these studies to any great degree on the 224 prospects it declined, however results revealed that none of the prospects declined by Eno ever finally produced a commercial well.

This selection process has enabled Eno to locate and secure a highly desirable prospect in the Permian Basin of Southeast New Mexico, which has all the indicators of a successful conventional drilling prospect, stacked pays, an enclosed anticlinal structural trap and the projection of high economics and very low risk.

Larry started in the oil business over 40 years ago. Prior to starting Eno Petroleum Corporation, Larry was a wholesale loose diamond broker covering 7 states in the Midwest from 1971 to 1977. Larry completed a one-year graduate course in 1978 at the Gemological Institute of America in Santa Monica, Ca. and then joined Federal Lease Filing Services Corporation rather than return to the Midwest.

The lease selection process was an extremely valuable education launching Larry into the more advanced acquisition of oil and gas mineral leases through the Government’s KGS Competitive Bidding System.

The upstream oil and gas exploration and production business always starts with the mineral lease, and Larry has always shown a very high level of skill in the selection of highly prospective leases.

Eno Petroleum Corporation has never wanted to take the role of an operator.The company’s success is attributed to its business model. Eno Petroleum does not maintain a fully staffed, fancy office and high overhead funded by investors.Eno has a large base of expert consulting geologists, engineers, lawyers and tax accountants who specialize in oil and gas activities. Operations are generally assigned to project management firms and their consultants on a location priority basis.

When you work with Eno, you will always have direct, and some will tell you “unlimited” access to the most knowledgeable person in the company…. Larry Milnes.
Home | About Eno | Testimonials | Client Login | Contact Us | Site Map
Web Design by eLink Design, Inc. | Hosted by Intelliwire, Inc.
©2021 Eno Petroleum Corporation. All Rights Reserved.

There are significant risks associated with investing in oil and gas ventures. The above information is for general purposes only and is not a solicitation to buy
or an offer to sell any securities. General information on this site is not intended to be used as individual investment or tax advice. Consult your personal tax
advisor concerning the current tax laws and their applicability and effect on your personal tax situation.